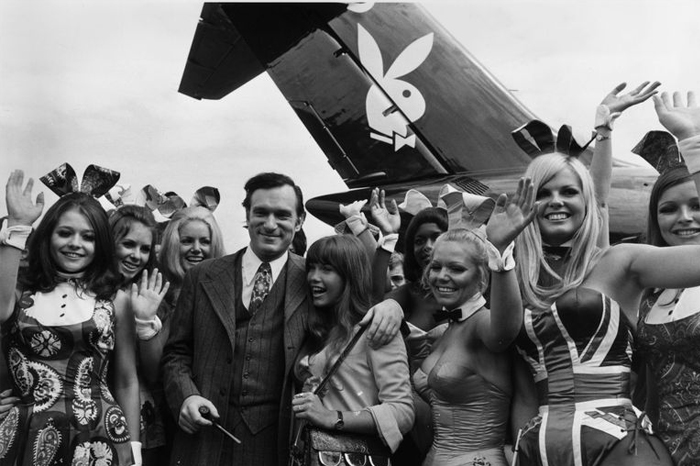 Playboy’s original title was to be “Stag Party,” but an unrelated outdoor magazine, Stag, contacted Hefner and informed him that they would legally protect their trademark if he were to launch his magazine with that name. Hefner and co-founder and executive vice president Eldon Sellers met to discuss the problem and to seek a new name. Sellers, whose mother had worked for the short-lived Playboy Automobile Company in Chicago, suggested the name “Playboy”.

The first issue, published in December 1953, did not carry a date, as Hefner was unsure whether there would be a second issue. It was produced in Hefner’s Hyde Park kitchen. The first centerfold was Marilyn Monroe, although the picture used had originally been taken for a calendar, rather than for Playboy. The first issue was an immediate sensation; it sold out within a matter of weeks. Known circulation was 53,991 (Source: Playboy Collector’s Association Playboy Magazine Price Guide). The cover price was 50¢. Copies of the first issue in Mint to Near Mint condition sold for over $5,000 in 2002.

The famous logo, depicting the stylized profile of a rabbit wearing a tuxedo bow tie, was designed by art designer Art Paul for the magazine’s second issue and has appeared on every issue since. A running joke in the magazine involves hiding the logo somewhere in the cover art or photograph. Hefner said that he chose the rabbit as a mascot for its “humorous sexual connotation”, and because the image was “frisky and playful”.